Conclusion cited from the abstract:  we show that FLZ elicits clinical response in heavily treated patients with poor response rates to primary therapy. We also show that increased IFNγ signaling gene expression scores in baseline BM appears to associate with response to FLZ therapy. Enrollment has been expanded to further define FLZ’s activity specifically in pts with primary refractory AML, and candidate biomarkers to enable identification of pts more likely to respond to FLZ.

In this phase 1 trial, the novel CD123-targeting ADC IMGN632 demonstrated a manageable safety profile and broad therapeutic window in high risk R/R AML and BPDCN patients. The encouraging single agent activity and safety profile, along with supporting preclinical efficacy studies, have led to the subsequent development of IMGN632 as monotherapy in patients with R/R BPDCN and MRD+ AML, and in combination with azacitidine and/or venetoclax in patients with R/R and untreated AML.

In pts with R/R AML receiving first salvage therapy, CR and achievement of MRD negativity were both independently associated with decreased CIR and longer RFS. The impact of hematologic recovery and MRD response in the salvage setting was largely limited to pts who did not undergo subsequent HSCT, whereas outcomes were similar for those who received HSCT. In the R/R setting, pts who achieve both CR and MRD negativity have the best outcomes, supporting CR with MRD negativity as the optimal response to salvage therapy.

Independent of HSCT, Q improved survival vs SC in pts with FLT3-ITD R/R AML in QuANTUM-R. Q + SC pooled analyses showed longer survival in pts with HSCT vs pts w/o and in pts with CRc prior to allo-HSCT. Importantly, survival post-HSCT was similar in the Q and SC arms, indicating that pts eligible for HSCT were appropriately transplanted, and the higher HSCT rate in the Q arm was beneficial to pts. More pts treated with Q underwent HSCT, likely due to a higher rate and duration of CRc with Q vs SC and better overall fitness. In pts preselected for low-intensity SC at study entry, 13 were able to undergo HSCT after Q treatment. Resumption of Q after HSCT was associated with better survival outcomes and was tolerable. These data illustrate the value of using Q to target the FLT3-ITD mutation as a part of the overall treatment sequence in pts with FLT3-ITD R/R AML. 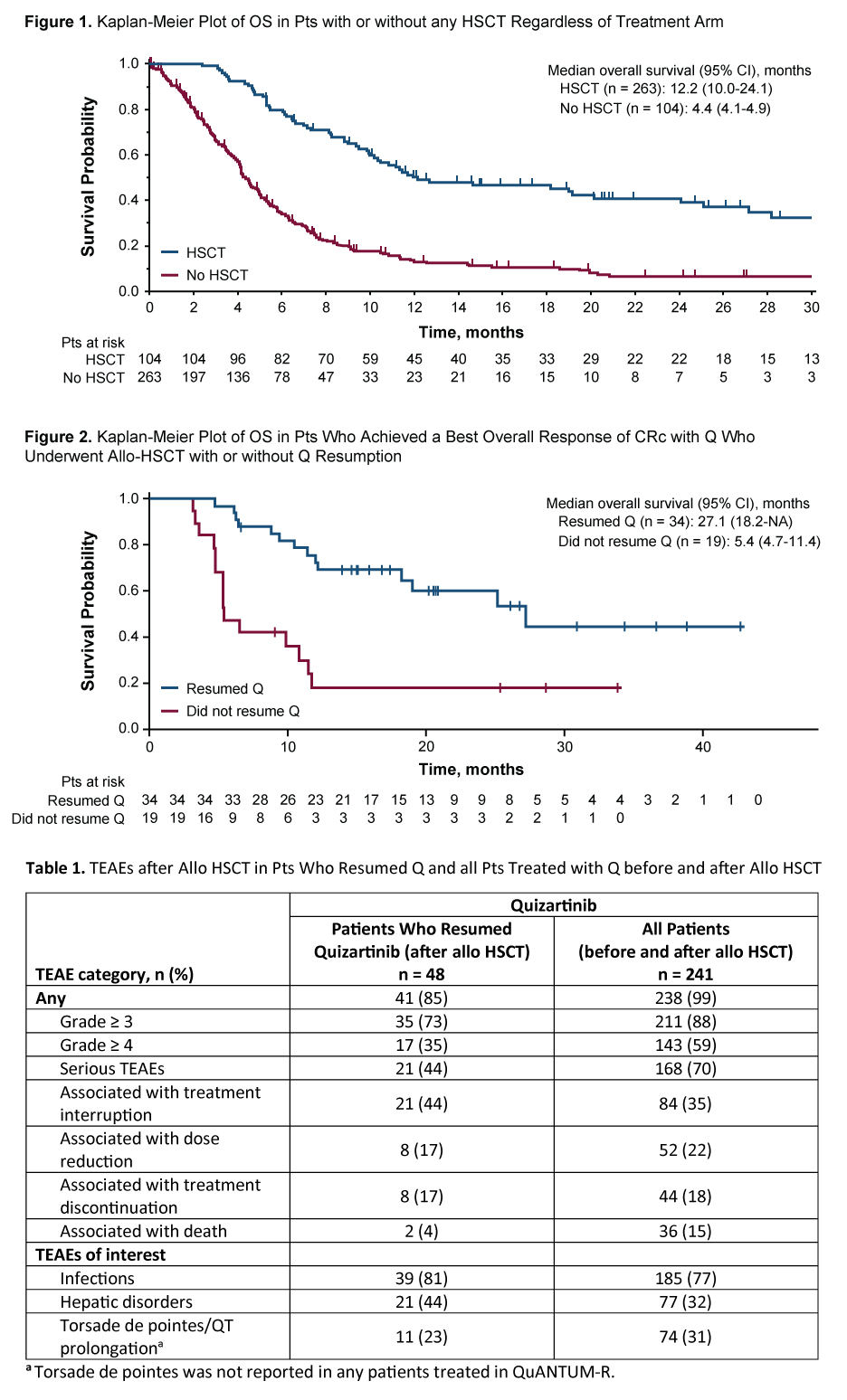 This is the first evaluation of the effect of baseline co-mutations on clinical outcomes in a large trial of R/R AML patients with FLT3-ITD mutations treated with quizartinib. Key co-mutations identified in this analysis were found to potentially impact treatment response and OS with quizartinib, relative to SC. Despite relatively low CRc rates in patients with IDH1/2mut, this group—as well as those with NPM1wt—derived the greatest OS benefit from quizartinib compared with SC on QuANTUM-R. CEBPA mutations were associated with high CRc rates and relatively long median OS, regardless of treatment arm. Patients with NPM1mut had a higher CRc rate with quizartinib vs SC, but this did not translate into longer survival on either arm compared with NPM1wt. A high allelic burden of FLT3-ITD at the time of salvage therapy was associated with relatively poorer median OS; quizartinib significantly improved survival of patients with high FLT3-ITD VAF relative to SC. Although these results require confirmation in an independent dataset, the modulatory effects of baseline co-mutations on treatment response and OS with quizartinib appear to differ from other FLT3 inhibitors. Our results indicate that a subset of R/R AML patients may particularly derive clinical benefit from quizartinib. 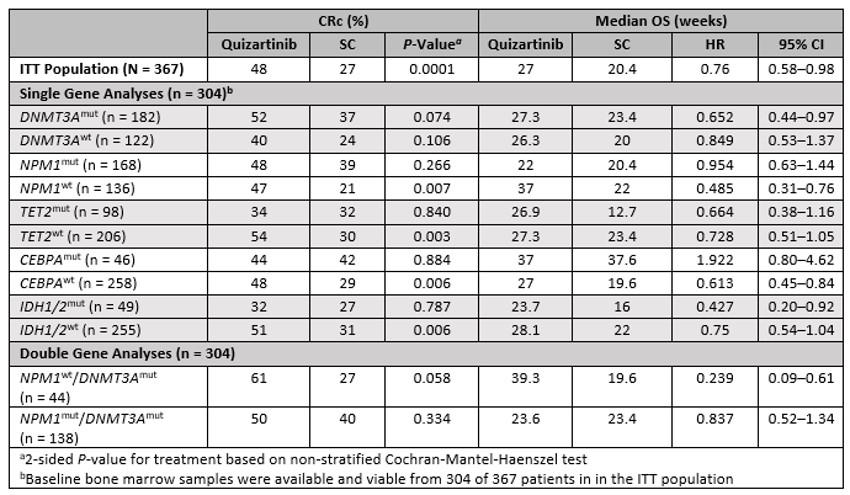